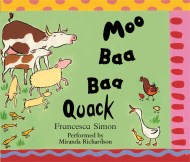 A book of Farmyard stories from the bestselling author Francesca Simon introduces the animals from Buffin Street. Being on audiobook gives the opoportunity to create…